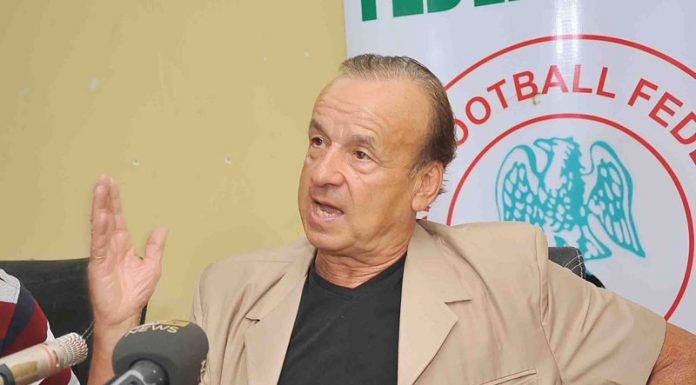 Ahead of the 2019 Africa Cup of Nations this summer in Egypt, Super Eagles Head Coach, Gernot Rohr, has given hope to former Kano Pillars striker, Junior Lokosa to return to the national team following his move to Esperance of Tunisia during the week.

Lokosa was a last minute drop from the final list of 23 players to the World Cup finals in Russia last year and the decision generated a lot of discussion in the media because many sees the young striker as a shinning light from the repackaged domestic football league.

In an interview with Radio France yesterday in Abuja, the Franco-German tactician stated that if the player is able to prove his worth with the North African team, it will surely boost his chances to return to Super Eagles in preparation for the African elite football tournament in Egypt.

On Monday, Lokosa who was the highest goal scorer with 19 goals last season finally moved to Tunisia which pundits speculated was made possible on the recommendation of the Super Eagles coach because the striker did not undergo any trial before he signed the two-year contract for the club.

Esperance FC is the defending champion of the CAF Champions League in which Lobi Stars of Makurdi is participating.

The former First Bank of Lagos striker had on different occasions made three failed attempts for a deal in Europe.

Lokosa was part of the international friendly match against Atletico Madrid in Uyo last year which Super Eagles Team B lost 1-2 to the Spanish side.

The player had his first training session with Esperance last night.