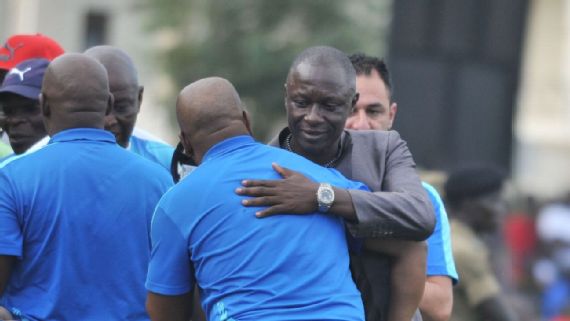 KCCA FC are unconcerned by the threat posed by their next CAF Champions League opponents Esperance as they continue to eye a quarter-final berth, according to coach Mike Mutebi.

The two sides meet in Tunis on July 17 as the continent's premier club competition resumes action,

"We are not scared of any team and the boys are working very hard to make sure we get something from this game," Mutebi told KweséESPN. "If we could beat the likes of Al Ahly, who have several national team players, we can also get a win over Esperance.

"We are not having sleepless nights because we are going to play Esperance," he added. "We shall play our brand of football and be very disciplined.

"Football today is more of team work than individual play."

The former Uganda Premier League champions will play in the CAF Confederation Cup next season after losing their title to Vipers SC, but have impressed in the group stage of the CAF CL this term.

Despite a narrow opening defeat by Township Rollers of Botswana, they secured one of the finest results in Ugandan football history by downing African giants Al Ahly 2-0 in Kampala in their second group game.

"There is nothing really special about some of these teams like Esperance, but we need to be organized and play as a team," continued Mutebi.

"After reaching the group stage of the CAF Confederation Cup last year, our target this year is getting to the quarter final stage of the Champions League.

"This game against Esperance means a lot to us because we need to get something from it before we play the two home games against them and Township Rollers," Mutebi explained.

KCCA FC have lost Derrick Nsibambi to Egyptian side Smouha, but the coach believes that their new faces can help compensate for the departing stars.

"We have signed players who will be important to the team, and we are going to be a much stronger team," Mutebi concluded.

Ahly, who picked up their only point in the barren draw at home to Esperance, are bottom of the log.